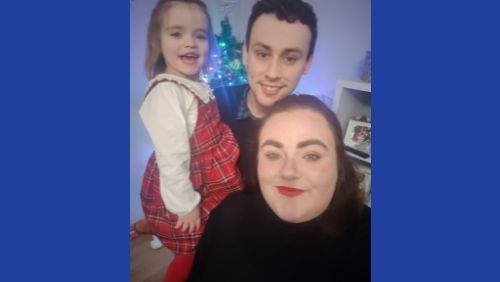 In this piece for National Epilepsy Week exploring the theme of #EpilepsyTogether, Nicole O’Connor from Dublin writes about how her family supports her with her epilepsy; raises awareness of some of the common myths out there about epilepsy; how she worked together with her medical team around her pregnancies; and how she discusses her epilepsy with her daughter Amelia……..

In October 2016 I had my first confirmed seizure.  My second and third seizures followed a couple of days later. These were tonic clonic seizures but since then, I mainly experience simple partial seizures and occasionally, I have partial complex seizures.

I am usually completely aware but can't always communicate during a simple partial seizure. I repeat myself and my words come out jumbled up. Sometimes I may also have a tremor or a small amount of shaking in one of my limbs or on one side of my body. In my partial complex seizures, I am aware of the seizure - at least in the beginning. I have all the same symptoms of my simple partial seizures except they are always accompanied by some kind of tremor or shaking, and I lose awareness or consciousness during the seizure.

I received my official diagnosis and began medication in April of 2017. As many people will reading this will know, it took some time it to find the right medication to treat my condition.

After the journey that was 2017, at the beginning of 2018, I unexpectedly became pregnant. I consulted with my medical team and the decision was made to stay on my medication rather than move to another one.

My pregnancy went well – barring a few simple partial seizures - and myself and my partner welcomed the wonderful Amelia in August 2018. However, it was a stressful period.

While becoming a new mother is a joyous occasion, I knew by working with my medical team that my seizures mainly occurred due to lack of sleep, stress and if I wasn’t eating or drinking regularly. Every new parent reading this will know that routine is difficult to come by when welcoming a new-born.

The idea of having a seizure while home alone with my daughter caused me a lot of anxiety and stress. Thankfully, this only happened on one occasion while on maternity leave. I do get an Aura before my seizures and on this occasion, I was able to call my partner, put Amelia back in the buggy and sit down before the seizure occurred.

My partner was amazing with ensuring we took all the best steps with managing my seizures after I had my daughter. He took the last feed at night so I could go to sleep early to ensure I was getting enough sleep.

It is a journey living with epilepsy and one of the real challenges we had was when Amelia witnessed me having a seizure during the first lockdown – when she was about 18 months old. It really frightened her and it upset me that I had to make my daughter aware of epilepsy when she was so young.

Together, we made the decision to try and explain it to her in a way she could understand. We sat her down and explained to her that sometimes Mammy's brain gets the hiccups. We told her that if that happened not to panic and to just sit near mammy until it stopped. Or if Daddy was home to go get Daddy. And that is what she does.

Usually after the seizure stops, she attempts to wake me by rubbing my hair or kissing my cheek.

Telling her about my epilepsy and how to react was the best decision we made. My seizures do not phase her now and they don’t scare her because she knows what she should do. Now that she is almost 4, we are expanding on her knowledge in terms of being potentially able to call emergency services or calling her Dad.

I wanted to write this piece for National Epilepsy Week as I want women with epilepsy to know that epilepsy doesn’t mean that you can’t have a family. Talk to your medical team and they can guide you. While my first pregnancy was unplanned, they were there to provide information and advice. We are now planning on having a second child, and I am actively consulting with my medical team around this.

I want the public to know that not all seizures are the same – I have the type of seizures that might go unnoticed so being educated about epilepsy is crucial. Finally, I hope my story of how my family have supported me is of some help to others.  Epilepsy can be a challenging condition, but we all need accept the help that is there and work together to help improve awareness and understanding.

Thank you, Nicole, for sharing and highlighting so many important points as part of National Epilepsy Week. In particular, we would like to highlight Nicole’s point around planning a pregnancy. Epilepsy does not prevent a woman from having a family – but it is important that pre-conceptual planning takes place where possible. Like Nicole is doing, consult with your medical team and have discussions with them around becoming pregnant. Work with your team together. Visit the 'Women' section of our website, where you will find further details and information on planning a pregnancy.