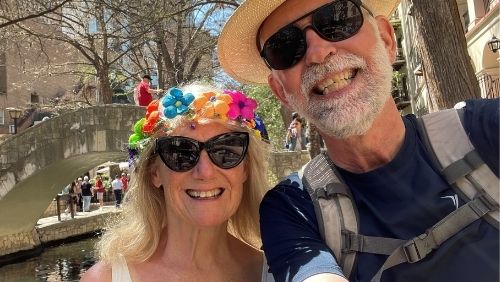 In this piece for National Epilepsy Week, Alison Langley writes about the support she receives from her husband Michael Shields to raise awareness of epilepsy – but also the struggles she has as a person living with the condition in being fully open about epilepsy. This is something that will resonate with many people living with the condition.....

On Easter Saturday I woke up twice. The first time was to get a cup of coffee and my iPad. It was one of those chilly, soft, rainy mornings, and my husband was sleeping in. So I let the dog back in, fluffed up the pillows on the bed and opened my iPad.

Then I woke up for the second time.

I was slumped over on my left side, my head awkwardly tipped forward, half on my husband, half on his pillow. The room was spinning a bit. I felt disoriented; everything was hazy, my stomach was upset. I could have sworn I had just heard music playing in a bizarre circus-like way. I blinked a few times to get my bearings and realised I had a splitting headache.

By now I was less foggy. I melted under the covers and pulled the duvet up to my chin.

“Oh my,” he said, rolling over and rubbing my head.

My husband has never been one to get excited. For the last 33 years, Mike Shields has been my rock. The one with the steady arm and calm voice. The person who has picked me up, cleaned me off, dried my tears and calmed my fears. He’s never waivered.

Here’s what makes this even more amazing: If I ever truly admitted I have epilepsy, most of my seizures would never have happened. It’s just that I’ve been in denial for nearly my whole life.

I mean, who wants to have epilepsy?

In the movie The Exorcist, doctors initially believe the child had epilepsy before realising she was actually possessed by the devil.  In The Andromeda Strain, everyone assumes a scientist has come down with the deadly virus, but really… you guessed it, she had a seizure. Dr. House, in the popular TV show staring Hugh Laurie, has to figure out why a presidential candidate collapsed during a rally.

Fact is, if you want drama, nothing beats out someone falling on the floor, jerking wildly and foaming at the mouth.

Why would I want to admit to that?

For decades, my calm, understanding husband has urged me to be an advocate. Break the stigma, he advises. Strike down stereotypes. Raise awareness. Don’t deny it or play it down.

I’ve often played it down, claiming to acquaintances that I have a ‘mild form of a neurological thing.’

But Mike says I should be honest. Tell everyone, ‘This is what epilepsy looks like. It’s no big deal.’

According to the World Health Organization, about 50 million people worldwide have epilepsy; In Ireland there are around 40,000 of us. About 70 percent of us can become seizure-free.

I think that’s why epilepsy can be hidden in a way that other neurological disorders cannot. While Parkinson’s has no stigma attached to it, epilepsy does.  Some of us (I raise my hand) try to deny our reality rather than raise awareness and try to change perceptions.

For the record: We don’t have fits (except of rage when someone suggests otherwise). We don’t faint (I’ve never seen myself as someone who’s fragile, which is what fainting implies). We are strong; we are everywhere. You just don’t often see us.

We are invisible because so many of us can be. But imagine a world where there is no stigma to having seizures. Where the correct response to ‘I have epilepsy’ is: ‘Oh, ok. What do you need from me?’

Until then, there will continue to be people like me, trying to hide their condition from the world. Unnecessarily tilting at windmills, when what this world actually needs is more people like my husband, who is calm, accepting and accommodating.

Thank you, Alison, for sharing this fantastic piece. We know that it can be a struggle for many living with epilepsy to be open about their condition – something Alison has captured perfectly in her piece but being open about epilepsy is crucial in helping ensure that there are many more Mikes across Ireland. If you would like to learn more about how to discuss your epilepsy with others, visit the 'How2Tell' section of our website.