In advance of International Epilepsy Day 2021, we're asking people  to take some time to learn more about epilepsy. Our "degree" will give you a very general oversight of a condition which affects 40,000 people in Ireland today and will only take a maxiumum of 10 minutes of your day! You are now officially enrolled so proceed to Module 1!

Module 1 – What is Epilepsy?

In medical speak, epilepsy is a neurological (brain) condition characterised by a tendency to have repeated seizures. Now if you don’t already have a medical degree, an easy way to think of a seizure is like a power cut in your home. Envisage sitting in your living room – the lights flicker, the power cuts out and in most cases, the power will come back on within a few minutes. Things won’t be as they were before as it takes time for things to get back to normal. Your fridge is making a bit more noise than it was before the power went out, your oven clock needs reset and your microwave might be beeping but eventually, with time & care, everything will return to normal.

This is what is happening in a person’s brain before, during & after a seizure.

Now that wasn't too hard, was it? Our warmest congratulations, you have passed Module 1! Scroll on to Module 2.

Congratulations on passing Module 1 and welcome to your second module which is about seizures. Now you might wonder why seizures is italiced, pluraled, bolded & underlined (we’re not sure pluraled is a real word but we’ve decided to take creative license with the English language to hit this point home).

This is because we’re trying to highlight the fact that there is more than one type of seizure that a person with epilepsy can experience. In fact, there is anything up to 50+ types of seizures that can be experienced by people with epilepsy.

Everyone is familiar with the type of seizure where the person falls to the ground suddenly and their muscles stiffen and jerk involuntarily. This is a common type of seizure known as a tonic-clonic seizure. But we also want you to bear in mind that seizures can present in other ways as well, depending on where in the brain they originate.

For example, a person could be fully upright during a seizure but could be in a trance-like state, fidgeting with their clothes, slurring speech, smacking their lips or displaying other forms of confused behaviour. This is another extremely common type of seizure, known as a focal (or complex-partial) seizure.

It is impossible to list the way every single seizure presents and we do not expect the wider public to know every single type of seizure and the medical term for them. But we really want you to know is that it is a MYTH that there is only one type of seizure. So, if you see someone wandering aimlessly or displaying characteristics like the ones mentioned above which would appear somewhat odd, bear in mind that they could be a person with epilepsy and that they might need your help.

Woooah - you're half way there, you're almost epilepsy aware! Excuse us...

Welcome to Module 3. So we're sure your asking now, "but what do I do if I see someone having a seizure?"

Let’s start off with the facts for seizure first-aid and we’ll start out with the version of a seizure you’re probably all familiar with; where a person falls over suddenly and they begin to convulse.

Stay Calm – this can be easier said than done, especially if you have never seen a seizue before. But remember, you can’t help anyone if you’re panicking – take a breath, assess the situation and get to work!

Time the seizure (Why? Keep reading!) 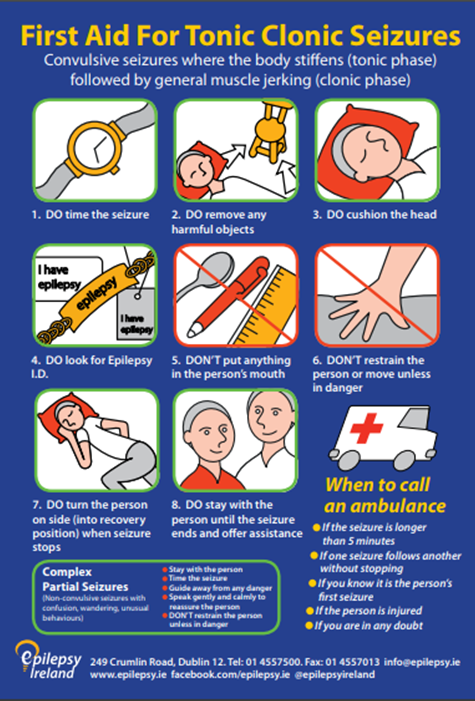 Remove anything harmful that might be near the person during the seizure; for example if they’re in danger of hitting a chair, move the chair. Have you ever stubbed your toe? You can instantly feel that pain as soon as you seen those words. Well, imagine whacking your arm or leg repeatedly off a chair when you have no control over the movements of your body – not a nice thought!

Cushion the person's head – if you’re wearing a  jumper, try and place it underneath the head to stop the person from potentially hurting themselves. Much like point 3, we’ve all inadvertently hit our heads off an open kitchen cupboard door (THAT SOMEONE ELSE LEFT OPEN); imagine having a seizure on a footpath and repeatedly hitting your head off concrete – again, not a nice thought.

Check if the person has an epilepsy identifier; many people with epilepsy may wear a bracelet or have a card in their wallet to say they have epilepsy; this can help you further down the line.

Turn the person on their side if possible during the seizure and into recovery position when the seizure stops.

When the person begins to recover, stay with them. In the majority of cases, that person will feel like they’ve just completed a triathlon – i.e, exhausted and they may be a bit disorientated (remember the bit earlier about the power cut and things taking time to get back to normal?)

And that is that!

“But!” – you might protest, “you said there is a number of different types of seizures.” We most certainly did say that and we noted how they can present in different ways. This could include the person being in a trance, smacking their lips, appearing confused & agitated, wandering aimlessly or even fidgeting with clothing. There are a few different things to bear in mind with these types of seizures and lucky for you, we’ve listed these below:

Time the seizure (Why? Keep reading….again!) 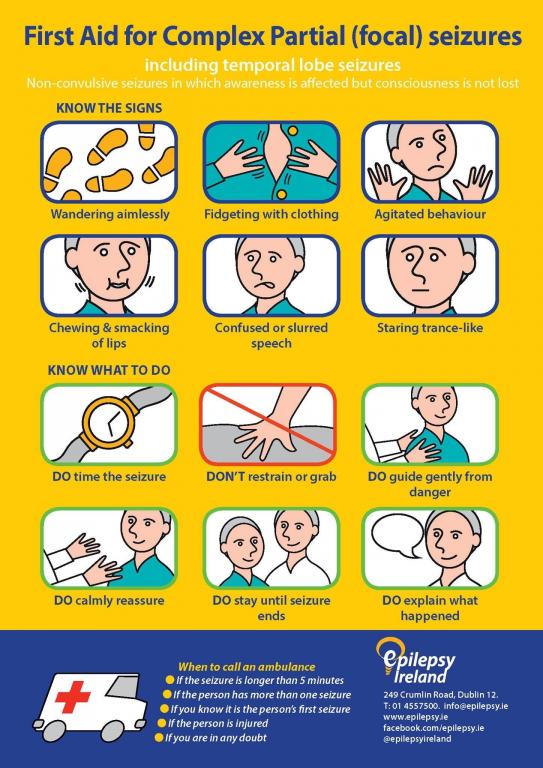 Guide the person away from any danger – in these types of seizures, the person can be upright so if you see them wandering onto a busy road, we can assure you that they would appreciate it if you could gently guide them away from traffic.

Talk gently to the person and do not agitate the person – at the best of times, for those of us without epilepsy, we may have experience of someone shouting or roaring at us be it at school or work – it doesn’t exactly do anyone any favours in those situation so imagine what it may feel like for a person with epilepsy mid-seizure.

When the seizure stops, stay with the person, reassure them and let them know what happened.  They will have essentially lost time during the seizure and will likely be somewhat confused coming out of it.

Module 4 - When to call an Ambulance

At this point, you’re well on the way to being epilepsy and seizure aware. Thanks for staying with us but there are just a few more bits to bear in mind if you come across a seizure.

So, you're probably already thinking, when should I call an ambulance?

You're so close to gaining your degree in Epilepsy Awareness. Just one more step to go. We believe in you!

Module 5 - Remember to sort the MYTHS from the FACTS!

It's been a long journey but here you are, in Module 5, and you're about to graduate with your degree in Epilepsy Awareness from the University of Epilepsy Ireland. This is where things get scary because we're about to talk to you about the haunting myths! We're going to have a bit of a throwback here by revisting our International Epilepsy Day campaign from 2020  but it is worth revisiting!

If you ever hear these myths mentioned in a conversation about epilepsy, we are going to arm you with the information in order to help you dispel these myths as you go out into the world with your new degree. Here we go….

YOU'VE DONE IT, YOU'VE COMPLETED YOUR DEGREE! It's been a long journey but you made it here on this special day and now we must wave goodbye to you....we're so proud of you. BUT WAIT, you need to Graduate!!!!