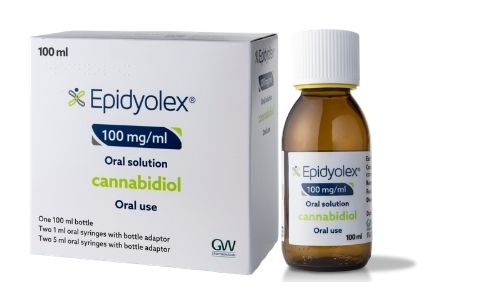 A small number of medications containing cannabinoids have been authorised as medications internationally. For example, dronabinol and nabilone have been licensed in some countries for chemotherapy-induced nausea and vomiting. Sativex has been authorised in Europe (including Ireland) for the treatment of spasticity in multiple sclerosis. These are referred to as cannabis-based medicines. However, none of these medicines are considered to have any therapeutic use in treating epilepsy.

In 2019, a CBD-only medicine called Epidyolex was authorised in Europe (including Ireland) by the European Medicines Agency. It became the first cannabis-based medicine to be approved in Europe with an indication for epilepsy. It had previously been granted FDA approval in the US in 2018.

Epidyolex can be prescribed as an add-on treatment to another anti-epileptic drug called clobazam (Frisium), to treat patients from the age of two years who have Lennox-Gastaut syndrome (LGS) or Dravet syndrome (DS). LGS and DS are rare and severe types of epilepsy that begin in childhood and can continue into adulthood.

Unlike the products that will be available under the Medical Cannabis Access Programme or approved under a Ministerial Licence, Epidyolex is an authorised medication, meaning that it has established a positive benefit/risk profile through clinical trials and is subject to ongoing monitoring by regulatory authorities such as the Health Products Regulatory Authority and the European Medicines Agency.

You can read more here about clinical trial data on Epidyolex.

Currently (March 2021), Epidyolex is available in Ireland, but it is not yet reimbursed under the Long-Term Illness (LTI) Scheme or GMS (Medical Card) scheme. This means that, at the moment, patients are required to pay for the medication privately at a significant monthly cost.

In 2020, the manufacturer of Epidyolex, GW Pharma, applied to the Irish authorities (the National Centre for Pharmacoeconomics or NCPE) to make the drug reimbursable under the LTI Scheme and medical card. This involved a health technology assessment (HTA) which assesses the clinical and cost effectiveness of the medication.

Given the strong evidence supporting the benefits of Epidyolex in LGS and DS and the huge unmet treatment needs of families affected by these conditions, Epilepsy Ireland made a submission to the NCPE in September 2020 supporting the need for its reimbursement.

The NCPE have now completed their HTA process and have recommended that the drug is not reimbursed unless the cost-effectiveness can be improved.While this decision is very disappointing, it does not mean that the medication will not be eventually reimbursed.

The HSE will now assess the NCPE’s recommendation along with other relevant information, such as the societal impacts of making the drug available and whether it would meet an unmet need. This will include Epilepsy Ireland’s submission supporting the reimbursement of this medication in which we focused on how families are desperate for effective new treatments and the potential positive impacts this drug could make in their day to day lives.

The HSE will also begin negotiations with the manufacturer of Epidyolex, GW Pharma with the aim of agreeing a price suitable to both parties. We will be liasing with all bodies on this most important issue and provide updates on our website and social media channels as further information becomes available. We will also update this section of our minisite.

Epidyolex has already been made available under the NHS in the UK. In the US, its indications have recently been expanded after further clinical trials to include tuberous sclerosis complex, a rare genetic condition that typically causes seizures to occur. The European Medicines Agency are currently (March 2021) looking at approving a similar extension to its authorisation.

A common question is whether Epidyolex will be available to people with other types of epilepsy if it is reimbursed. While it is indicated only for DS and LGS, it is possible that specialists could prescribe it 'off-label' for people with other types of epilepsy. However, this would most likely be possible only in rare circumstances where other treatment options have been exhausted.

Back to main page