Welcome to our International Epilepsy Day 2021 page where we will go through our campaign and what it was all about!

What’s the deal with the computer messages that formed your campaign?

In these times of remote working, we’ve all had issues with our laptops not responding or crashing. Generally, with time, care and attention – we can sort it all out ourselves without requiring the need for an IT guru!

An epileptic seizure is similar to a computer not responding or crashing. In general, they only usually happen for a 2 to 3 minutes on average and with time, care and attention – we can respond to a seizure without requiring assistance from medical services.

With the computer messages, we’re trying to show you what a seizure is actually like and what is happening in a person's brain during a seizure.

The people in the videos and images are all standing. I thought seizures involve people falling down?

You’re correct BUT not all seizures present like this. Some people can be fully upright during a seizure but may appear vacant or non-responsive and can even wander around in their seizure state. These are called "focal" or "partial" seizures and are just as common as the convulsive seizures where people lose consciousness (called "tonic-clonic" seizures) that you may be thinking of. Our videos and images highlight the fact that there can be many different types of seizures that people experience.

Got it! So what do I do if someone has a seizure?

First of all, know how to recognise both of these common types of seizure. During a tonic-clonic seizure, the person generally falls to the ground and will be unconscious. Their muscles will stiffen and then arms and legs begin to jerk rapidly. This will typically last for 1-3 minutes, after which, consciousness slowly returns.

Focal seizures are a little harder to identify. In some focal seizures, the person's awareness will not be affected but they may experience a range of symptoms including déjà vu, jerking movements, a strange taste or smell. In other focal seizures, the person's awareness is impaired. They may appear agitated or confused, stare trance-like or they may begin to wander aimlessly. Speech may become slurred or they may exhibit behaviour such as chewing, smacking their lips or fidgeting (e.g. with buttons, jewellery etc).

The three simple steps of TIME - SAFE - STAY will help you respond appropriately once you've identified that a seizure is taking place.

Why time the seizure?

The most important (AND FIRST) step of seizure first aid is timing the seizure. Why? Because, if the seizure goes over 5 minutes, that can be dangerous for the person having the seizure so emergency services will need to be called.

Why keep the person safe?

In the case of focal seizures, the person can be upright but their awareness may be impaired. So if they wander onto a busy road, we can assure you that they would appreciate it if you could gently guide them away from traffic. Similarly, in the type of seizures you might be more familiar with (tonic-clonic), remove anything harmful that might be near the person during the seizure in order to prevent injury. For example, if they’re in danger of hitting a chair, move the chair. Put something soft under their head like the cushion or jacket. Have you ever stubbed your toe? You can instantly feel that pain as soon as you see those words. Well, imagine whacking your arm, leg or head repeatedly when you have no control over the movements of your body – not a nice thought! Keep the person safe but never restrain them or hold them down. Oh, and please don't put anything in their mouth!

Let's go back to the computer analogy which is the basis of this campaign. You stay with your computer as you run through the steps to reboot it. It takes time for it to recover but you stay with it to ensure that it does. Similarly, a person who’s just had a seizure will often feel like they’ve just ran a marathon and will be very tired and may be quite confused. They have just lost time and it may take a while for them to come round and realise what has happened. If someone's had a tonic-clonic seizure, place them in the recovery position. If they've had a focal seizure, sit them down. In both cases, stay with them; talk gently, explain what's happened and reassure them that they’re ok.

Hang on, didn't you say something about calling an ambulance?

Yes, we did! If you've started by timing the seizure and the person hasn't come out of their seizure after five minutes, then you should call an ambulance. Generally speaking, when a person with epilepsy has a seizure, that is not in itself a medical emergency. But if the seizure goes on too long, it may become an emergency, so be ready to call 999 if needed. There are also a few other circumstances when you should call an ambulance BEFORE waiting five minutes - if you know it is the person's first seizure; if one seizure follows another rapidly; or if the person has been injured during the seizure. If you are in any doubt, it is always better to make the call. 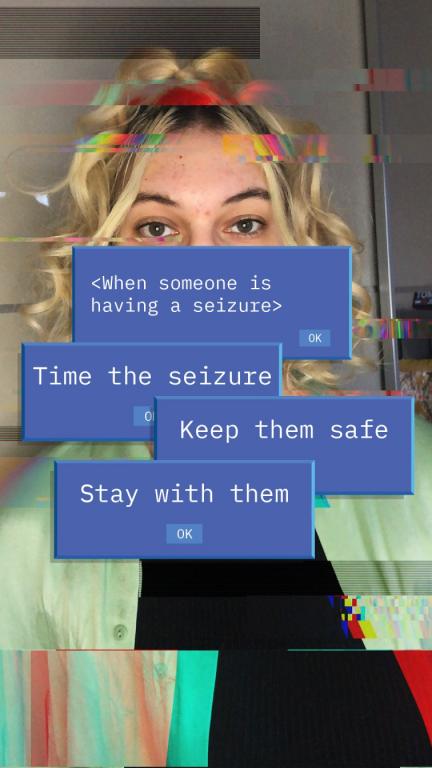 Yes, really! There is a lot less to seizure first aid than you may think and it can be easily summarised using our key messages for #EpilepsyDay:

There’s a few myths out there about seizure first aid which you may have come across in the past. You’ll note that none of the three key steps mentions restraining the person or putting something in their mouth. This is because they are MYTHS. Please DO NOT DO EITHER OF THESE THINGS IF RESPONDING TO A SEIZURE. Sorry for shouting but it’s so important that these myths are confined to history ASAP. People with epilepsy and their families would really appreciate it!

Let's see... In a survey of 1,000 members of the Irish public that we commissioned in January for International Epilepsy Day, we found that 87% of respondents MASSIVELY underestimated the prevalence of epilepsy in Ireland – i.e – people seem to think epilepsy is quite rare. The reality is quite different. There are over 40,000 people living with the condition in Ireland –  almost 1 in 100 people.

That's why we think it's so important to know the three key steps. It is likely that you know someone within your community; family; friends or colleagues who is living with the condition and perhaps you are not aware of it. They would really appreciate it if you took some time to learn a little about epilepsy and seizure first aid today.

The images that formed our campaign feature real people with epilepsy from across Ireland. They have been incredibly brave in allowing their image be spread across social media and the press as part of our campaign. Why not learn a bit more about them and what they’d like you to know about Epilepsy? See the menu for our campaign to learn more about them!