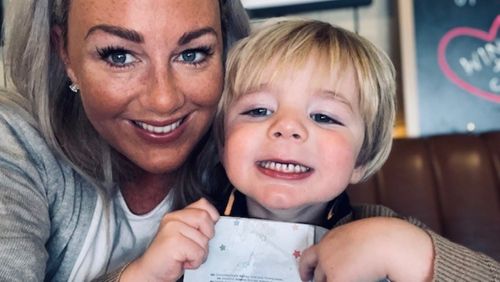 On the 26th of July 2018, our little ray of sunshine, Theodore, entered the world after a healthy pregnancy. He weighed in at a healthy 8lb 10oz and was a complete joy from the moment we met him. He was just a beautiful happy little baby boy, meeting all his milestones and melting hearts.

In December 2018, we celebrated Theo’s first Christmas and my gorgeous boy had just turned 5 months old on St. Stephen’s Day. Then on New Year’s Day, our world stopped spinning. We were sitting on the sofa after New Year’s dinner when I saw Theo’s eyes roll back in his head. It was just once, and I doubted if I had seen anything at all. Nothing else untoward happened and I forgot about it.

The next evening, January 2nd, Theo was in the bath, giggling and sticking his tongue out. I took a photo as it was just so cute - or so I thought. I put him on the bed to dry and dress him. Chatting away to him, I was horrified to see him tuck his chin in and his eyes rolled back in his head. This time there was no mistaking it. I did what all mums do - I called my mum! My mum, Helen, is a long retired paediatric nurse and my “go to” for all things. She said to trust my instincts and go straight to A&E, so off I went.

A long night of waiting in A&E finally saw us admitted at 4am. We were seen by the Paediatric Consultant at 8am and he told me it was likely to be wind/colic and nothing at all to worry about.  He sent us home. I felt a bit silly for making a fuss but delighted to escape, off I went. Nothing else happened that day and I was so relieved.

Theo was hard to settle that night and crying a lot. He never cried like that; he was usually such a placid baby. I just felt something wasn’t right, so I started to Google. I found a YouTube video of a child having a similar episode and saw the STOP acronym. I filed it away, but Theo’s movements were not as pronounced.

The next morning, Theo was happily chatting away and playing in his play centre when my worst fears appeared in front of my eyes. His head started dropping and his eyes simultaneously rolled back in his head in clusters. I did what was against my instincts and I filmed it on my phone. I went straight to my GP and explained the situation and showed her the video. She said it was a bit concerning but she didn’t know what it was, so she wrote me a referral to see a private paediatrician. I was made feel, for the second time that I was making a fuss over nothing. The letter arrived a few weeks later with an appointment for May!

Back at home, it started again.  This time I was adamant what I had seen on the STOP video, was what I was seeing with my own little boy. I remember feeling helpless, as if I had exhausted my GP and A&E options already but I hopped straight in the car and headed back to A&E with a determined mindset to get this addressed. It was not colic or wind! In A&E Theo did not present as a priority as he was physically well. No fever, no broken bones but, unseen to everyone, his brain was in a catastrophic state.

We had to wait for hours. Nurses came and went, and my patience was running out. Theo’s cluster seizures started again; he was becoming very distressed. Through my tears I filmed it again, went up to the nurse’s station and begged a Registrar to see him at that very moment. I explained what I thought it was and showed him the STOP image I had saved as a screen shot. That Registrar, thankfully, had some neurology experience. Theo was rushed to “resus” and things escalated fast.

I had compiled several video clips at this stage and the team sent these to the Consultant Neurologist. She communicated to the team in A&E that this was an emergency, so she ordered a battery of tests, including a CAT scan and bloods. I think they were looking for a brain tumour at this stage or meningitis. All were, thankfully, clear but Theo was admitted that night, for further investigative tests on the Monday, when the specialists were back in after the weekend. We would be there for just over three weeks.

Theo was so good, and the nurses were so kind but, again, I felt like a bit of a fraud as he was so happy and fit looking and we were in a ward full of very sick children. You wouldn’t know there was something so serious going wrong for him unless you saw the seizures. Theo was sent for an EEG as soon as they could fit us in and we waited patiently for the results, fully expecting that again nothing would show. I was so wrong.

My world fell to pieces when our neurologist came by, told me to sit down and delivered the worst news I could imagine. Theo’s brainwaves were scrambled and presented as what they call ‘hypsarrhythmia’, one of the key diagnostic criteria in Infantile Spasms. He also presented with epileptic activity. I was handed a bunch of print outs on Infantile Spasms, and she outlined the treatment protocols that can work. She also explained that there was a good chance that he would not respond at all to the treatment. Theo was started immediately on high dose steroids and an Anti-Seizure Medication. He was having cluster seizures and it was terrifying. They went on for up to 5 minutes, head nods, groaning and arm jerks. We had to call the nurses each time it happened, and they needed to time them, and, in some cases, a rescue medication had to be administered, which was incredibly upsetting. It completely sedated him, and my little boy was unresponsive.

Theo’s dose of steroids was so high he needed a lot of observation and medication to protect his stomach. He had several EEGs to monitor the hypsarrythmia and thankfully the treatment plan showed results in that it cleared the dangerous brain waves. Theo has never had a clear EEG as he also has epileptic activity but the pattern that causes Infantile Spasms was cleared.  Finally, we were able to go home, with a prescription of Anti-Seizure medication to help control the seizure activity.

Tests showed that Theo had regressed developmentally. He was seen by a team that included Physiotherapists, Speech and Language Therapists, Occupational Therapists. He also was seen by an Ophthalmologist to check his sight and the structures behind his eyes. I remember a Speech and Language therapist blowing bubbles, playing music and he didn’t respond. My little boy needed his Mommy like never before, so I engaged my inner strength and applied myself to learning as much as I could about his condition.  Over those three weeks in hospital, I fell into a routine with Theo doing all the exercises the Team had recommended for him. I had worked as a tutor to children on the Autistic Spectrum when I graduated from college, so I was familiar with some of the techniques. The care and attention he received from the staff in hospital was second to none but unfortunately once he was discharged, we lost access to this Developmental Therapy.

Theo was still very quiet and not very responsive to much. It was a very hard time for the whole family, and no one really knew what to say. Minimising the seriousness of his condition was meant to reassure but nobody really understood our pain. People would stop to talk to him in his buggy and get all awkward when he wouldn’t respond. We went back to our Mom & baby classes but it only highlighted how far delayed he was in comparison to his peers.

On St Patrick’s Day, I started to notice what I know now as ‘absence’ seizures. There was still something wrong but no spasms. The Neurology Team increased his medication dosage. A few months later, Theo was nine months old we were at a Sensory baby class. Theo was sitting in front of me in the floor when suddenly he fell forward suddenly and cut his lip. Later that day, my friend was visiting, and she thought she saw his eyes roll. I desperately wanted it to be nothing, but I knew it was starting again.

Theo’s Granny Breda said to trust my gut and drove us straight to A&E. Theo was admitted again and an EEG was arranged.  We were devastated to learn that the hypsarrythmia was back and he was started straight away on the steroid treatment an inpatient. We were also told that he had relapsed, and the prognosis was not good. I was due to return to my full-time job as a Sales Director in IT and Theo was due to start crèche but had to put those plans on pause and that and I stayed home and became Theo’s full-time carer.

I started to look into early intervention specialists at this time as I was worried about the developmental delay/regression. Unfortunately, all doors were closed to us due to massive waiting lists and, in one case, his condition was declared “not bad enough for treatment”, even though he was not assessed by them.

I was lucky to meet another incredible Irish Infantile Spasm mama, through a Facebook page. She was the only person who I was able to speak to who understood! She recommended a private Children’s Neuro Therapy Clinic. Theo had intensive Speech and Language Therapy as his speech and communication was quite delayed. Bit by bit he made progress and I truly credit this early intervention for supporting Theo overcome some of the damage created by the Infantile Spasms. I nearly cried the first time he engaged with a little cow with flashing lights!

Theo started in preschool in September 2020 and I returned to work. We have been so blessed to have such incredible staff at every stage of our journey. Theo finds it hard so sit still for long and initially found changes in his routine and caregivers hard to adapt to. All his teachers took the time to understand Theo’s needs and to make his classroom a happy place for him. He is a very social little fella and is incredibly bright and funny. His comprehension and academic skills are ahead of a lot of his peers. He still struggles with elements of ADHD and we are currently exploring that with his Neurologist with the aim of helping him in advance of starting Primary School. He has had a few non-IS seizures but thankfully responds well to medication and we pray this will continue to be the case.

Looking back at Theo’s journey, early treatment and intervention has been vital in Theo’s recovery. My advice to any parent is to trust your gut, you know your child and what is and is not right. You need to be their advocate at every stage, do not settle for not getting the right level of attention. Our healthcare system is very stretched, and it can be very difficult to identify Infantile Spasms. I am often told by experts that Theo’s seizures are very subtle! Arm yourself with all the information you can find from reliable resources, look after yourself and never give up. Take 5 minutes to read the information on the Epilepsy Ireland website to know the signs of IS and what can be done to STOP them.

I really hope this story reaches even one parent doubting themselves or who has just had their world shattered by a diagnosis.