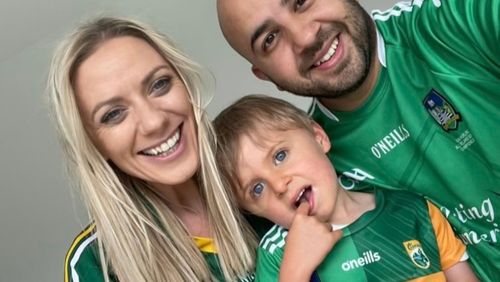 Our handsome baby boy Benjamin was born in November 2018 after a very hard road to conceive.

We were over the moon and ecstatic to begin our road of parenthood. By January after a gruelling viral infection over Christmas, our world was about to be turned upside down.

Ben was an extremely irritable baby from then onwards. He never slept, hated breastfeeding, was slow in reaching milestones, and by March was already on the path to public physio to help hopefully reach certain missed milestones.

Instinctively I knew in my heart of hearts something was not right - but we were first time parents so the whole ‘over worried parents’ thing was most people’s first impression.

I exhausted every avenue possible to me to get answers as to why he was not progressing as he should be but every time, I felt I was close to figuring out what was wrong, it never transpired to be the correct path.

His head would drop oddly at times, and we couldn’t get answers for this. He was regressing in skills; his head was dropping randomly; and his irritation had gotten to a point where the veins used to protrude in his head. I was constantly on edge and trying to see how his development compared to his two cousins close in age. It just didn’t seem to add up, but I was at a loss as to who to turn to. I visited a GP on July 10th who gave me a prescription for reflux medication as a solution to all these red flags.

Feeling I had finally gotten an answer, I thought everything was to be ok

On July 11th, 2019, Ben suffered his first cluster seizure in my arms as I was feeding him a bottle. We as parents weren’t even aware of what was happening or the severity of the situation. I shouted to my husband to come quick and luckily for us he had the know how to start videotaping. It was a little jerking movement but was happening consistently every 30 seconds.

We rushed to A&E and within 24hrs our lives would never be the same.

Ben was diagnosed with Infantile Spasms due to the regression we reported, and the video evidence provided by my husband turned out to be key to helping our clinicians understand what was happening. The neurologists we dealt with were fantastic and timely in their approach to Ben’s diagnosis.  We were told to prepare ourselves for special schooling and that he would never walk or talk. We just couldn’t fathom how this could be, but we vowed from that moment onwards we would do anything in our power to help Ben.

He spent three weeks in hospital where he would have multiple episodes a day lasting up to 25 minutes with the “jerking seizures” associated with Infantile spasms occurring every 30secs to 1 minute.

The spasms were under control after 6 days, but the treatment involves the use of Anti-Seizure medications and steroids– that he had to continue to take – as well as being transferred to different medications as he grew. As many people reading this will know, Anti-Seizure medications come with their own side-effects, and this was another challenge that he we had to manage. Even after Ben got out of hospital, there were weekly visits to the hospital for blood pressure checks, blood tests and EEG’s etc. While this physical battle continued, there was also the emotional battles that come with watching other children reaching developmental milestones - while trying to celebrate the small steps of progress Ben makes, like holding his head up and smiling again.

During this time Ben piled on weight due to the steroids and wouldn’t need sleep. Even to this day sleep is hard to come by.

Although the name Infantile spasms gives the impression that it is something a child will grow out of, it is misleading. If the spasms go uncontrolled, they can go on to cause permanent brain damage.

Only time will tell how Ben’s development will be and ongoing assessments will be part of our and his immediate future.

We are now three years post-diagnosis, and we still have mountains to climb in terms of development.  However, Ben has already defied the odds and is walking again. He remains non-verbal and has a global development delay and we also had a recent diagnosis of ASD. It has been extremely challenging, and it’s been hard to access the services he needs.

But despite all that he has been through, Ben is the happiest and most affectionate child.

I’m sharing our story as I just want people to be more aware of Infantile Spasms and the impact they can have. I would say to any parent who knows and believes something isn’t right to trust that instinct within them, record every odd movement and head to A&E and demand an EEG. Infantile Spasm are so very often misdiagnosed as was the case initially for the Ben - the quicker the diagnosis is received, the better a chance for them to have the best possible outcome!

If you are a new parent, please take heed of our experience and learn the signs of Infantile Spasms. It is crucial information to know.