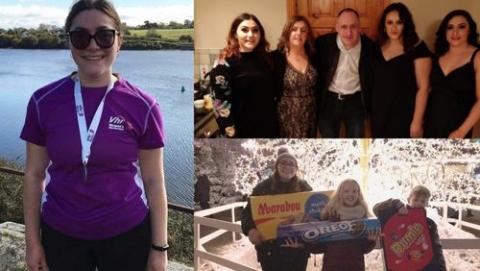 Tickets are now on sale for a special night of celebration, set to take place in the Talbot Hotel, Wexford Town on January 7th, in memory of the late Louise Young.

Louise, from Murrintown, passed away suddenly on January 8th, 2021, from Sudden Unexpected Death in Epilepsy. She was just 24 years old.

Louise was a young woman with epilepsy, and in the months before her untimely passing, had become an active fundraising and media volunteer for Epilepsy Ireland – running the VHI Women’s Mini-Marathon to raise funds for the organisation; and sharing her own journey with epilepsy to help raise awareness of the condition.

Despite their continued grief at the loss of Louise, her family and friends have pledged to continue her awareness and fundraising work, efforts which have led to tens of thousands of euros being raised for Epilepsy Ireland in Louise’s memory.

The celebration on January 7th at the Talbot Hotel will be a special event to continue this work, while also thanking the local community who have generously supported all the efforts in Louise’s memory. It will also be an opportunity to highlight how the funds raised will be used to improve the lives of people with epilepsy in Ireland.

Louise’s sister Katie commented, “With Louise’s sudden passing during the height of COVID restrictions, her family and friends never truly got to celebrate Louise and the life she led. This event will be the first opportunity for us to do this - and we know Louise would love it as she was such a social butterfly during her life!

“We’re looking forward to thanking the local community for the support they have shown for Epilepsy Ireland in Louise’s name. While we intend on continuing our fundraising efforts on the night, it is also an occasion to have some great food, listen to great music and have great craic in Louise’s memory. We’ll also have guests from Epilepsy Ireland on the night to share what is being done and being planned with the funds raised.

“We know Louise would be incredibly proud of everything that has been done to date. We believe a truly fantastic legacy - which could be of huge benefit to thousands of people with epilepsy and their families - is being established in Louise’s name.

“We know it’s usually a quiet time of year for many people, but we would appeal to the entire Wexford community to please join us, support the growing legacy and kick off your New Year with a night to remember for Louise!”

Tickets for the event cost €50 and are on sale now. To buy a ticket, please email Katie on louiseslegacy7@gmail.com. Tickets can also be purchased at the Talbot Hotel on the 13th November from 12:00pm to 02:00pm  on the 13th November and at the Rosslare Harbour Community Resource Centre from 09:00am to 05:00pm. Funds raised from the event will be donated to Epilepsy Ireland for the continuation of the Louise Young Research & Seizure Alarm fund.