This Week is Charity Trustees' Week - meet our board! 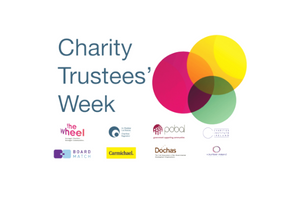 This week is Charity Trustees Week and is a week in which the work & dedication of voluntary boards of Charities across Ireland is acknowledged and recognised.

We are privileged at Epilepsy Ireland to have a dedicated and hard-working board who are committed to achieving a society where no person’s life is limited by epilepsy.

This commitment and dedication has particularly shone through over the last two years with the ongoing COVID-19 situation and the challenges this has brought for our organisation. Our board have been readily available to plan, strategise and advise to counteract these challenge in order to ensure we continue to be there to support people with epilepsy and their families.

On Charity Trustees Week, we would like to thank them for all their work and support for Epilepsy Ireland.

You can read more about our board membership below.

Cathy Grieve (Chairperson)
Cathy joined the Board of Directors in 2014 and was elected as Company Secretary in 2016. She is also a member of the Remuneration and Governance & Nominations sub-committees. Cathy has had epilepsy since 2008. Her background is in journalism and having spent 19 years with BBC News, she set up her own media production company in 2009. Cathy was elected as Chairperson in December 2019.

Clare O'Dea (Secretary)
Clare joined the Board of Epilepsy Ireland in 2017. Her interest in the work of Epilepsy Ireland emerged when her son was diagnosed with a rare form of epilepsy. She brings a wealth of experience gained in corporate strategy, finance, investments, marketing and fundraising. Clare is a director of Select Strategies, a management consultancy. She holds an MBA from the UCD Smurfit Graduate Business School and a Higher Diploma in Psychology from UCD.

Paul joined the Epilepsy Ireland Finance & Audit sub-committee in 2017 and was elected to the Board in 2018. He currently serves as Treasurer. He is an experienced accounting and finance professional who has worked for over 40 years in the Financial Services sector including many years at AIB Global Treasury.

Helen Behan
Helen brings a wide range of knowledge and expertise from her work in the Charity sector. She was diagnosed with Epilepsy in 2015 and having joined the Board in 2021, is passionate about contributing to the mission of our organisation in achieving a society where no life is limited by Epilepsy

Mark Dowdall
Mark has served on the Board since 1999 having initially become involved as a result of a family member’s epilepsy diagnosis. He was Chairman of the Board from 2013 to 2019. He has also served on the Finance & Audit sub-committee for several years and is a former Treasurer. Mark’s professional background is in technology, financial services and banking.

Paul Fahey
Paul Fahey is a qualified pharmacist and health informatics expert. Paul is also a qualified Company Director holding a Diploma in Company Direction from the Institute of Directors.  He has been a pharmacy owner for 25 years and has completed an MSc. in Health Informatics from Trinity College Dublin. He served as the President of the Pharmaceutical Society of Ireland from 2011-2013. Paul is actively involved in FIP (International Pharmaceutical Federation) serving on its Technology Forum.

Mary Fitzsimons is a former funded Investigator with the FutureNeuro centre at RCSI and is the Director of the eHealth Ireland Epilepsy Lighthouse Project. She was previously Principal Physicist at the Department of Neurophysics at Beaumont Hospital, where she was responsible for the development of the Epilepsy Electronic Patient Record. She has a long history in the field of epilepsy research and joined the Board of Epilepsy Ireland in 2018.

Derry, who has a family member with epilepsy, was elected to the Board of Epilepsy Ireland in 2014 and currently serves on the Remuneration sub-committee. He is a Partner and Head of the Management Consulting Department at BDO and served as the company’s Managing Partner from 2011 to 2014. He was elected as President of Dublin Chamber of Commerce in 2016.

Ambrose joined the board of Epilepsy Ireland in 2018. An accountant and qualified compliance professional, he recently retired from the role of Chief Compliance Officer with VHI Group.  He holds professional memberships of the Institute of Directors, CIMA and the Association of Compliance officers and brings valuable skills to the charity in areas such as risk management, compliance, corporate governance and strategy.

Dr Anne Kilroy
Anne joined the Board in 2021.  She has a keen interest in management and living with the condition as her daughter was diagnosed with epilepsy in 2017. Her professional background is in science and she has a Master’s degree in Microbial Genetics and a Ph.D. in Environmental Science. She worked in the pharmaceutical industry both in Ireland and the USA and as a consultant in an Engineering Company. She has volunteered with a number of charities and schools both in Ireland and the USA in the areas of education, special needs and healthy parenting .

Prof. King is a recently retired Consultant Paediatric Neurologist from Children’s Health Ireland (CHI) at Temple St., Rotunda Hospital and Beaumont Hospital. She is a Professor in Paediatrics at University College Dublin, School of Medicine & Medical Science and has many publications in the field of Paediatric Neurology including “A Handbook of Neurological Investigations in Children”. Professor King has collaborated in several Genomic projects which have led to definite diagnoses, genetic counselling and personalised treatments for many Irish families.

Shane O'Brien
Shane joined the Board of Epilepsy Ireland in 2021. He has also been a member of the Finance & Audit sub-committee since 2019. Shane has had epilepsy since 2015. He is a Chartered Accountant and a Chartered Tax Adviser and works as a Senior Tax Manager with the Irish Tax Institute. He has been involved in a range of charitable causes in the past, particularly in the area of mental health.

Vincent is a retired Irish Army Major General who has an interest in epilepsy through a family member. Vincent Savino is the Honorary President of the Association. His involvement with Epilepsy Ireland goes back to the 1980s when he played a key role in establishing fundraising activities needed to support the work of the charity.