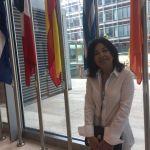 Yesterday (September 26th), Karen Keely of the FACS Forum Ireland addressed the EMA's public hearing on valproate in London. The hearing was investigating whether 2014 European-wide measures to restrict the use of valproate in girls and women of childbearing potential have been effective and whether additional measures to reduce risks associated with the drug are needed.

A full transcript of Karen's speech is below.

Thank you to the Committee and to the European Medicines Agency for organising this Public Hearing and for allowing me to speak today.

My name is Karen Keely, from Ireland. I speak not just on my own behalf but on behalf of the FACS Forum Ireland, an umbrella group of Irish organisations including Epilepsy Ireland that have come together to raise awareness of foetal valproate syndrome and to seek better supports for families affected.

I'm also speaking for the growing number of affected families that have come forward in Ireland in recent years – a group that we are in the process of formally establishing as OACS Ireland in the near future.

Today is an important and emotional day for me and for many Irish families who have struggled for years to have our children's disabilities recognised, diagnosed and treated. At last, it finally feels as though we are being listened to.

In relation to the first question, the risks have been well established over many years and backed up by the EMA as part of its 2014 review. It is beyond doubt that the drug significantly increases the risk of malformations, autism and developmental delay. We are all aware of the statistics and others will highlight these I'm sure throughout the day.

Behind all statistics are real human stories and mine is that I am the mother of three adult children – Harry, Lee and Lorcan - who have all been affected by exposure to valproate. We are living evidence of the risks and the devastating impact of this drug. 2 of my 3 boys require lifelong care and will never be able to have a normal life. They will never be able to get married. Never be able to have children. They have been robbed of all the joys of life. The effects of sodium valproate have been unbearable.

Unfortunately I am far from alone. There may be over 400 affected families just in Ireland and I assure you that none of us want future generations to be affected or ignored in the same way that we have. But if we continue on the same path, that is exactly what will happen.

Given the evidence and the real human impact, the FACS Forum Ireland supports the EMA's 2014 recommendations that valproate should be avoided in pregnancy unless all other options have been found to be ineffective. In the rare cases where valproate treatment is necessary, communication between doctor and patient is crucial in establishing informed consent.

The measures introduced by EMA in 2014 to reduce risks were a step in the right direction. From the Irish experience, the restrictions and the work of the HPRA have helped bring public and professional attention to the issue; PILs and SPCs have been updated; and data suggests that overall prescriptions for valproate have been declining.

However, we have a number of important concerns. We believe many of the changes have been implemented simply to tick a box with little regard for delivering real change.

PILs are not the solution. How many patients really read this information especially when they're on a drug long-term? On-box warnings are crucial but these are not yet in circulation in Ireland. Many patients also receive medications in plastic bags with no original packaging or PIL.

Information materials for the public and professionals have been produced by both Sanofi and the Health Service Executive (HSE) but both are inadequate. HSE materials can only be found online and have not been printed or distributed. The drug company materials were only distributed in small quantities and nowhere in their booklets is the familiar brand name Epilim used. These are missed opportunities.

We have limited data in Ireland to gauge outcomes but Epilepsy Ireland has conducted a number of surveys of women taking valproate. These surveys have found that doctor-patient communication is improving since 2014, but still only 56% of women surveyed last December say that have had discussions on this issue with their healthcare professionals.

We believe that a lot more can and must be done...

Number 1: All existing and new risk-reduction measures must be outcome-driven and measurable. Those charged with implementing measures must also be responsible for measuring them. Ticking a box is NEVER enough

Number 2: The use of Valproate information resources should be mandatory and evidenced. A signed Checklist should be recorded for all women of childbearing potential on the drug, including those under GP care.

Number 3: There needs to be nationally maintained registers for women prescribed with Valproate to run alongside registers of children already affected by exposure to the drug

Number 4: National implementation groups, including patients and patient organisations, must be established to oversee implementation of existing and new measures.

Number 5: I urge the creation of properly resourced public awareness campaigns to ensure that ALL women taking the drug are aware of risks.

Number 6: Brand names as well as generic names on all patient-focused information are a must. I've lost count of the number of times I've heard "I don't take Valproate, I'm on Epilim".

Number 8: We call for a greater role for pharmacists in identifying women at risk and reporting back to the prescriber.

Finally, at this stage, we do not necessarily believe that prescribing guidelines for valproate needed to be tightened further to restrict access. However, should outcomes from lesser measures still prove ineffective within the next 1-2 years, this may need to be considered.

Before I finish, I would also like to encourage PRAC to consider non-pregnancy risks of valproate, especially its effects on mitochondrial function and on the third generation. I also want to place on record the urgent need for greater research into the scale of the problem across Europe, the need for inquiries to determine accountability and the need for appropriate services for families affected. Unfortunately, in Ireland our repeated efforts to discuss these issues with our Minister for Health have so far proved fruitless. Neither Sanofi nor anyone else has ever been held accountable for what has happened and that is not good enough.

I have been mourning my children since the day they came into my life. I am determined to not let this injustice happen to other families in the way it has happened to mine.

Thank you for your time.