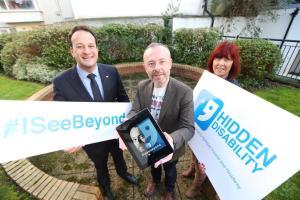 Amárach Research conducted surveys before (December 2015) and after the campaign (June 2016) which clearly show its impact. Some of the key findings are:

Speaking about the findings Epilepsy Ireland CEO Peter Murphy said: "These results are very encouraging and clearly show the positive impact of #iseebeyond in such a short space of time. The stories that were told clearly touched the public consciousness and helped bring a more compassionate response. Hundreds of thousands of people across the country are affected by hidden disabilities and the campaign aimed towards a more inclusive society where no one should feel burdened. However, there is still much work to be done and both Epilepsy Ireland and Headway plan to continue the great work of #iseebeyond into the future."

CEO of Headway, Kieran Loughran was also keen to praise the campaign: "These results show what two charities can achieve when they work together and are committed to a common goal. For Headway #iseebeyond was about reminding people that the person standing in front of them may have a hidden illness they are unaware of. Most people in Ireland don't realise the challenges facing someone with a brain injury but within just a few months knowledge is beginning to spread. Our ultimate goal is to reverse the lack of awareness for all hidden disabilities."

#iseebeyond reached out to companies, universities, community services and individuals through a series of 6 short videos to promote positive attitudes towards people living with a hidden disability. Companies already supporting #iseebeyond include Munster Rugby, Energia, Flogas, IRUPA, HAVAS, BDO and Marketing Network, amongst others.

For the next phase of the campaign, #iseebeyond hopes to specifically target the issue of hidden disability in the workplace, providing resources to inform and support employers in recruiting, supporting and retaining employees with hidden disabilities.

*Surveys were conducted by Amárach Research from 7-11 December 2015 and June 13 – 17 across a total of 2,000 participants in Ireland. It included quotas set on gender, age, social class and region to achieve a sample aligned with national population.