#GE2020 - Candidates who have pledged to work on Epilepsy issues 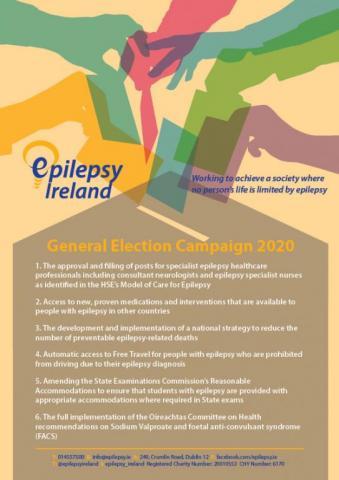 With the General Election campaign now coming to a close, Epilepsy Ireland has been busy reaching out to candidates seeking support for our key epilepsy priorities for the next Dáil term.

It is important to note that Epilepsy Ireland are non – political and that we are willing and ready to work with everyone elected to the 33rd Dáil in order to achieve our overarching aim of achieving a society where no person’s life is limited by epilepsy.

However, it is also important to note and acknowledge when political parties and their candidates make a commitment regarding issues that will directly impact on the lives of people with epilepsy and their families. It is also important that our members, service users and supporters around the country are aware of these commitments ahead of polling day.

With that in mind, below is a compilation of the feedback we have received to date on our key asks.

In particular, there have been significant commitments made with regard to the issue of Sodium Valproate.

Alongside this, many individual candidates from around the country have responded by email, by phone and on social media committing to help achieve our key epilepsy priorities.

As of Friday morning (7th Feb), these candidates are: