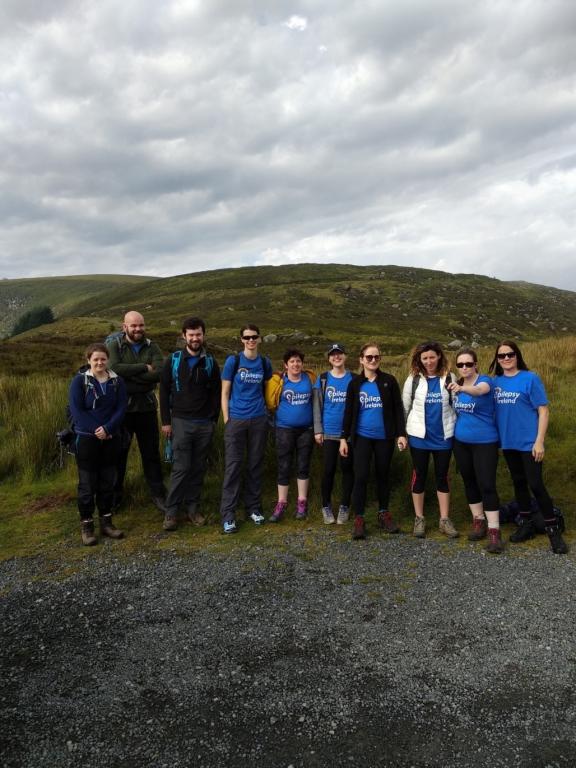 So if you're here, you must be thinking of signing up to the Peaks 2020 but still have some reservations - hopefully this testimony from Yvonne McAleer - who took part in last year's event - will show you that this is a weekend not be missed!

I had the most amazing weekend completing Ireland’s Ancient East Peaks Challenge – great company, mighty craic, brilliant guides and fantastic scenery. What more could you ask for?  Up with the lark on Saturday morning, we all assembled in the Epilepsy Ireland offices in Crumlin.

The nerves and excitement were palpable on the bus to our first ascent.  I questioned why I’d signed up at all and if I’d trained enough. How tough would this be? We began with Tonglagee Mountain which stands at 817m.  A great mountain to start with, enough to get the heart pumping and test us.  You could feel the confidence of the group rising as we reached the summit.  ‘Sure, if we can climb one,’ we thought, ‘the other three should be no bother, right?’

We hiked on a little further to view the beautiful, heart-shaped Lough Ouler before descending for lunch.  We devoured a fine selection of sandwiches, dithered over selecting snacks for our next challenge and then it was back on the bus for Lugnaquilla.

We ascended from Glenmalure Valley. We were right in the heat of the day now so Stephen and Barry (our guides) made sure we kept hydrated. The scenery here was absolutely majestic – I was sorely tempted to have a Timotei moment in that waterfall. The group had started to bond at this stage and I for one, was having a whale of a time!

On the way up, the focus often had to be on our feet due to the terrain.   It was such a huge achievement to reach the summit – spirits were high and there were smiles all round. The weather was clear enough to spend a bit of time at the top and appreciate the panorama.  On the descent, I made sure to stop regularly to drink in the views and the total tranquillity of the place. I think this might be why it took us six hours, instead of the expected five, but we still had time for a sneaky paddle in the river before getting on the bus.

Next on the agenda was a hearty stew, made by the very capable William, at our Glendalough hostel accommodation.  Local tour guide Mary entertained us on a tour of the adjacent cathedral city. She has a quare oul tale to tell if you ever have the pleasure of meeting her! The Glendalough hotel was perfect for a swift nightcap (they do a lovely pot of tea!) before we collapsed wearily for the night.

An early start (again!) and we set off for Lugalla. Some of us really felt this one but you are well rewarded by the amazing views over Lough Tay which reveal themselves. Having been cool enough on the way up, the sun beamed down on us at the mountaintop. We were beaming too – I felt truly on top of the world!

The final challenge was Blackstairs Mountain.  It was a hard slog to the peak but I was determined to finish. The weather wasn’t too kind to us on this one. But we didn’t mind the rain as we grabbed the obligatory but very quick photo at the cairn.

That was all four in the bag – job done!  Everyone felt elated.

We were treated to a fabulous buffet meal afterwards in the garden at Clashganny House Restaurant. The sun shone again as we reminisced on our feats and cemented friendships. Our guides Barry, Stephen and William from North West Adventure Tours were top class, knowledgeable, entertaining and encouraging. They had looked after us so well, along with our witty and professional bus driver Daithi (Feehily’s Sligo Travel Centre).

I have to say I gained so much from participating in the challenge.  First and foremost, it’s wonderful to be able to give something back to a charity who have supported my family so well.  Secondly, it was a great impetus to improve my fitness and gave me a huge sense of personal achievement.  I was truly buzzing during and afterwards. An unexpected benefit was all that I learned in relation to epilepsy.  Although it’s not necessary to have any link with the world of epilepsy to participate, I think everyone had some connection.   I learned different things from the various participants, from family members of people with epilepsy, people with epilepsy and those working in this area.  I know many other participants felt the same, even if they only felt comfortable listening.  It was wonderful to talk about shared experiences and gain insight into other perspectives. Sharing and listening in this way can be enormously supportive.  I felt strong solidarity with the other members of the group – we were truly in it together, in more ways than one!

I can heartily recommend the event to anyone considering participating next year – you won’t be sorry you did!